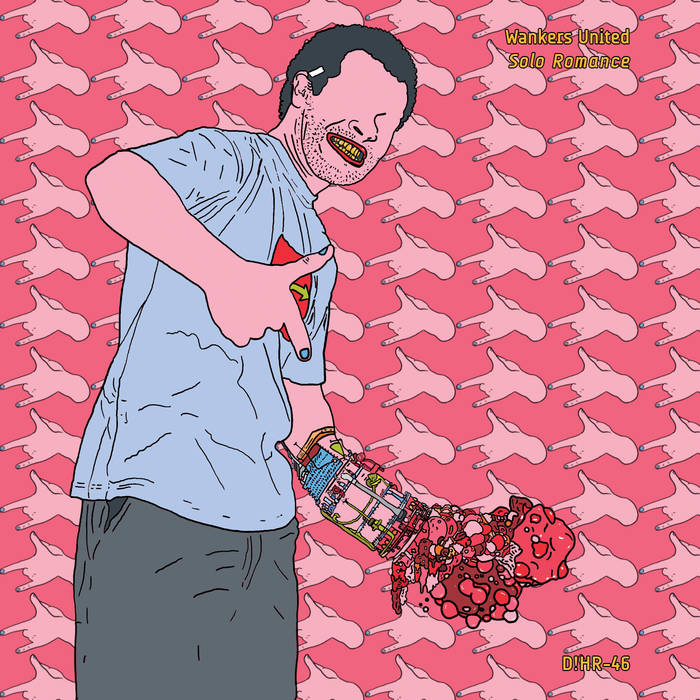 For its 46th release, Da ! Heard It Records goes for high fidelity.

The years go by, but the passion stays; this is what Wankers United seems
to be telling through Solo Romance, a new album where the artist from
Saint-Ouen continues to create beautiful stories with his machines.

Two years after Polygon Soup (2018, Da ! Heard it Records), Thomas
Lanza affirms a bit more his love for frank sonorities inherited from Detroit
electro. This time gap has allowed his robotic funk to take on a bit more
speed, to flesh out multiple warm melodies and to enrich itself with a thicker
sound, notably thanks to the mastering work of his long-time companion
from Finland, Mesak.

It must be said that, contrary to what the title of this cassette may suggest,
Thomas shows throughout the pieces that he still remains well surrounded.
Beyond the portrait adorning the sleeve, which was illustrated by his friend
from Marseilles, Poborsk, this fake loner evidently enjoys enameling the
name of each instrumental piece with allusions to his circle or to other nice
memories buried deep in the coil. The ensemble, albeit slightly nostalgic, is
however not backwards-looking; it mainly reminds those who will listen to it of the long path walked by this fine connoisseur of electronic sonorities.

Solo Romance, Da ! Heard It Records’ 46th release is distributed under aCreative Commons BY-NC-ND license. The album is available for
download and listening for free at the following address:
www.daheardit-records.net/en/discography/dhr-46

All tracks By Wankers United
Artwork By Poborsk
Mastering By Mesak