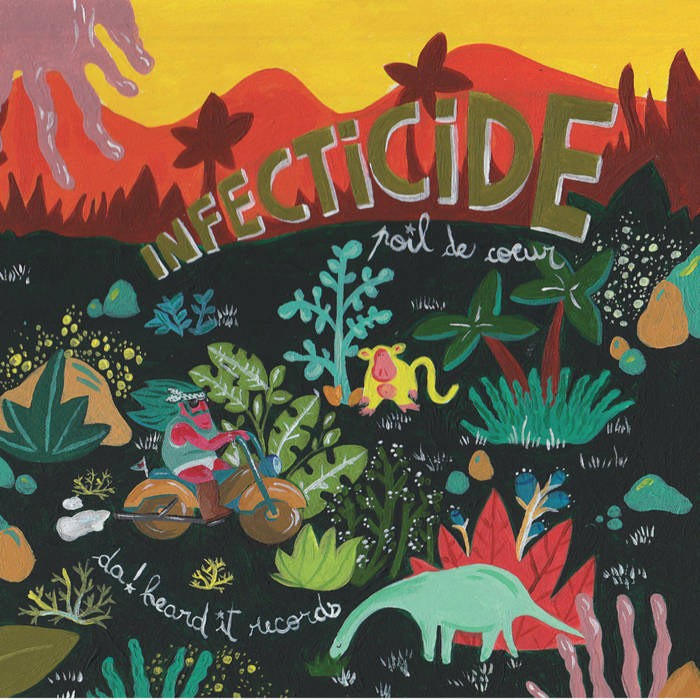 For Da ! Heard It Records’s 29th release, Infecticide returns to heckle with French chanson with psychoactive brilliance and fervor: “Poil de Coeur” arrives with the new year, like a musical greeting card under a dead Christmas tree. Inside, a journey into deep waters, through treats of neuroleptic wave, punk sweat, and the poetry of evenings that end at 3 pm in the morning… The dominical pleasures proposed by Michel Drucker will never have the same flavor.
As accomplished artists, the nasty three invest any and all means that get between their dirty hands to turn their offspring into a nocturnal weapon with a sadistic character, and the audience finds itself on its knees in front of such mastery in the art of bullshitting.
We are dealing with a precious trouple, in picturesque French scenery. Even if the Parisian trio keeps pounding pies in our faces, like with “Fais-le moi-le”, and even if the flat country that is not theirs suits them perfectly, to reduce it to the elegant EBM would ensure showers of rotten tomatoes, as evidenced by the abrasive “Pistache” which could have dubbed a block party at the time of the Boogie Down, or “Ton Tanga”, between electronic power and the exaltation of intimate undergarments. With “Prehistronic” or “Petit Tricheur”, we once again encounter what made the squadron trademark of the first album: a rock mix of synthetic music, or, as one sees fit, a rock synthesis of synesthesia.
One must also point out the panache behind the lyrics of Infecticide, such as in “Le monopole du coeur”, a phantasmagorical vision of the great dictators of our history; or in “Une petite motte de peur”, of which the hellish slomo dub accents of hell give us a friendly reminder of our condition as humans: “un chimpanzé en pull, un babouin maléfique” (“a chimpanzee in a sweater, a maleficient baboon”).
The heartening illustrations of Junie Briffaz add a final touch to these 13 firebrands. The physical object, touchable with the figures of one’s hand, offers 1 badge, 2 postcards, the lyrics, and a sticker.

“Poil de Cœur”, the 29th release of Da ! Heard It Records is distributed under a Creative Commons BY-NC-ND license. The album is available for free listening and downloading at the following address: www.daheardit-records.net/en/discography/dhr-29